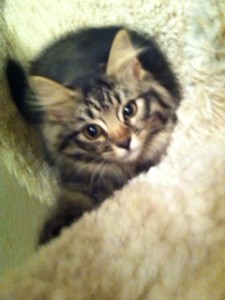 “What are you doing?” Dave asked. His voice belayed suspicion that things are only getting thicker.

“I just want to prepare for the possibility that we can’t find homes for them.”

The door that had contained our guests for two weeks now stood open. Inside, curiosity greater than caution, wide-eyed kittens carefully approached the opening. Not five feet away, Sima, our scrappy Siamese, watched, her growl threatening as they approached, her bottle brush tail, tight, tense.

It then occurred to me to create a distraction. I grabbed a toy I had bought earlier. Kelly green and lemon yellow feathers attach to a bird like ball, which  attached to a yarn, which attached to a stick. As the bird bobbed and danced above the girls, they forgot about the pair of eyes that was evaluating 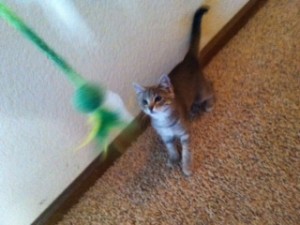 their every move. They reached, batted, jumped, fell over backwards, tumbled together into a ball as they ran into each other. The entertainment worked. Sima’s tail smoothed, their clown-like antics, clearly not a threat.

Dave sent an email complete with adorable pictures to the associates at his office. The two people who had seemed certain that they wanted a cat changed their minds. One person asked if they could be outdoor cats. “Not after all the work I’ve done so they could be indoor cats,” I retorted to Dave.

Yesterday, I left a message for our cleaning lady to peek in on them after letting her know they were looking for a home. She wrote, “They didn’t like me at all. They hissed and hid behind the toilet.” 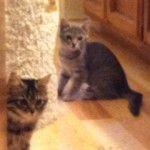 Of course they did. They have feral beginnings. Dave and I are the only humans they have known. Even though Misty, the light grey one, now runs to greet me when I open the door, and Nelcha no longer hisses when she climbs on the cat tree to be petted, Dave and I are still the only two humans that have ever approached them. If we take them to the SPCA, will they be the two kittens people pass by? Maybe no one will be willing to overlook their aggressive manners. What if no one sees how much they just want to play, be petted, and belong to a family?

So yes, these two are still up for adoption, and I believe would have an easy transition to another home. But until then, they will have a comfortable home with us, our two territorial cats, and the rest of our menagerie. Yesterday, Dave said, “If we keep them…”

Attachment. Commitment. One step at a time.